Leaves of the Horopito tree were traditionally used by the Maori people of New Zealand to treat stomach pain and diarrhoea, this is probably due to its astringent (tissue tightening) and antiseptic properties.  Skin complaints were treated using bruised leaves that had been steeped in water or chewed before application. The peppery constituents of Horopito stimulate the circulation when it is applied topically, and also when taken internally.

The main biologically active constituent of Horopito is known as polygodial. Polygodial is a component of the “hot taste” in peppery spices common in traditional Japanese cuisine, and it has been shown to exhibit significant antifungal and antibacterial activity. Researchers in New Zealand demonstrated the ability of polygodial, isolated from Horopito, to inhibit the growth of Candida albicans (the yeast that causes thrush), and other researchers have shown it to be effective against a variety of yeast-like fungi. 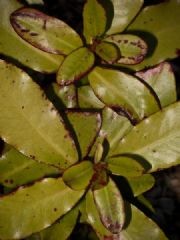