Republished with the permission of Pharmacy Today. www.pharmacytoday.co.nz 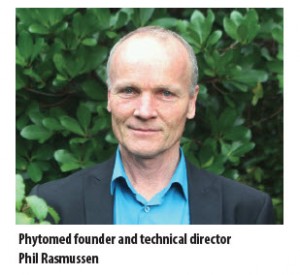 TWENTY YEARS AGO, Phytomed was nothing more than an idea, a caravan office in a backyard and a herb-milling machine driven by a Morris 1000 motor.

Much has changed since then for the company, which has grown from humble backyard beginnings to manufacture more than 240 herbal extracts as well as its own consumer brand of herbal medicine, Kiwierb.

The company’s range of herbal medicines is sold to trained practitioners, including medical herbalists, naturopaths, pharmacists, GPs and specialists, for compounding followed by dispensing.

Others are produced for third parties which sell them under their own brands in New Zealand and Australia.

Phytomed founder and technical director Phil Rasmussen was not keen to reveal the company’s net profit or current financial value to Pharmacy Today but says on average over the years it has grown between 20 per cent and 25 per cent annually; at times as much as 40 per cent.

Right from the start, Phytomed’s focus was clear: herbal extracts and medicines. Exports were a logical early step in the business, and getting Good Manufacturing Practice (GMP) certification was a key part of the process, Mr Rasmussen says.

The company executed its initial GMP audit with “flying colours” 11 years ago and proceeded to work towards getting its products licensed as medicines in Australia and Europe, he says.

Mr Rasmussen prefers to use the term medicines rather than dietary supplements to describe the company’s products.

“Herbal (phyto) medicines are by nature medicinal; they are used for health purposes and sometimes for treating very serious conditions.”

Mr Rasmussen says the company is “going down challenging regulatory pathways” to get Kiwiherb sold in the UK and Europe.

He feels the lack of world-class regulation in New Zealand around the natural health industry is “embarrassing”.

“The world is big and New Zealand is a very small country; if we had a similar lack of regulation around our dairy industry, we wouldn’t have one [a dairy industry],” he says.

“In all, I think regulations are essential for our industry and that is part of the company’s overall philosophy.”

Mr Rasmussen says regulatory issues go way back to when he was the New Zealand chair of the proposed Australia New Zealand Therapeutic Products Agency (ANZTPA) interim expert advisory committee, established under the former Labour Government in 2006.The New Zealand and Australian governments spent 12 years developing a planned trans-Tasman regulatory agency, the ANZTPA, but it was not to be.

The effort failed after the legislation didn’t pass its second reading in the New Zealand Parliament.

The government changed and the ANZTPA legistlation was succeeded by the Natural Health Products Bill which was also never passed by Parliament after attracting criticism from New Zealand First leader Winston Peters and some sections of the New Zealand natural products industry.

This bill was crafted by the National Party and Green Party, and again Mr Rasmussen was chair of a government-appointed interim expert advisory committee charged with approving ingredients deemed as suitable and safe for the approved ingredients’ list.

Despite having existed for longer than many conventional drugs, and being increasingly supported by compelling scientific evidence, herbal medicine continues to contend with resistance from the medical fraternity, Mr Rasmussen says.

But with ageing populations, increasing healthcare budgetary constraints and growing evidence of effectiveness of many herbal medicines, he predicts there will be an increase in the level of use in all countries.

The initial Phytomed premises spanned half an acre and various sheds before relocating to Rosebank Road in Avondale,Auckland.

The company moved to its current facility at 16 Charann Place, Avondale, six years ago and recently took on the adjacent half-building.

Phytomed employs about 50 staff across New Zealand and Australia and has a Māori shareholder, the Ngāti Pāhauwera Development Trust.

Mr Rasmussen says the company is well supported through the recent appointments of its chief executive Mark Callaghan and marketing manager Claire Richardson. “We have some very exciting times ahead of us.”