Please note: this herb is NOT the same as Kava Kava (Piper methysticum)

Kawakawa is one of the most distinctive New Zealand native plants. It was one of the most important healing herbs in Rongoa Maori (traditional Maori herbal medicine) and the use of Kawakawa as a healing or tonic herb is still popular today.

The leaves, simply chewed or made into infusions, were widely used as treatments for stomach pains and indigestion, particularly where due to over-eating.

Kawakawa is also used as a tonic with gentle stimulating and rejuvenating properties, and early settlers substituted it for tea, due to its refreshing and sustaining properties.

Topically, Kawakawa leaf applications were also used for bruises and rheumatism, the pain of neuralgia and nettle stings, as well as for eczema.

Hot Kawakawa infusions and decoctions have long been a popular treatment for winter ailments, this probably relates at least in part to the significant diaphoretic (sweat-inducing) effect produced by such preparations.  Like other plants in the pepper family, stimulation of the circulation is an effect of internal consumption of reasonable doses of Kawakawa preparations.  Such activity could make it useful in conditions such as chilblains, varicose veins, and poor circulation. 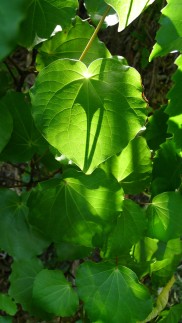