The first description to the western world of the ceremonial use of an intoxicating beverage prepared from Kava was made by Captain James Cook following his Pacific voyage in 1768. The drink, prepared as an infusion in an elaborate manner after first chewing the root, is consumed on formal occasions or meetings of village elders and chiefs, as well as in reconciling with enemies and on a more social basis. It remains an important social custom in many Pacific Island countries today.

Most of the islands of the Pacific possessed Kava prior to European contact, particularly those encompassed by Polynesia, Melanesia and Micronesia. The botanical name for Kava originates from the Latin for pepper (Piper) and Latinised Greek ‘intoxicating’  (methysiticum). After drinking the Kava beverage a pleasantly relaxed and sociable state develops, after which a deep and restful sleep occurs.

German and American studies have established Kava as a safe, non-addictive anti-anxiety agent with an efficacy comparable to benzodiazepine drugs such as Valium. While mildly euphoric effects can be produced after large doses, several studies have shown that moderate doses generally do not impair reaction time and in fact may slightly improve it. 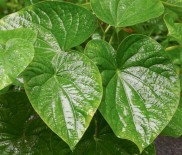