The name "tea-tree" comes from the early bushman who used Manuka and Kanuka leaves to brew a drink similar to tea.

The Maori and early settlers used to chew young shoots or swallow a drink made from seed capsules as a cure for dysentery and diarrhoea. The liquid from boiling the bark was used to treat constipation, as a sedative to promote sleep and reduce fever, for bathing sore eyes, treating colic, inflamed breasts, scalds and burns. The white gum was applied to scalds and burns and was taken by adults and children to relieve coughing. Kanuka flowers produce a reasonable amount of nectar that is favoured by honeybees, and is popular for its strong taste and reputed antibacterial properties.

Kanuka has shown antimicrobial activity against Herpes simplex and possibly other viral infections. Activity against various species of fungi has also been demonstrated, including those responsible for athletes foot and candida (thrush). In recent years many herbal practitioners and patients have used topical preparations containing Kanuka oil for such infections with impressive results.

The difference between Kanuka and Manuka

Kanuka is the larger tree, growing up to 10 m.
Its foliage is softer to the touch than Manuka.
The kanuka flowers later than manuka, usually in starting in December, with the flowers emerging in bunches or groups.
The seed capsules are smaller than those of manuka.

Manuka is a smaller than kanuka, reaching around 4 m high.
It has prickly foliage and a pungent scent.
The singular flowers are larger than Kanuka and may have a reddish tinge.
Manuka flowers in spring early summer and the stamens are shorter than the petals.
The seed capsules are larger than those of Kanuka. 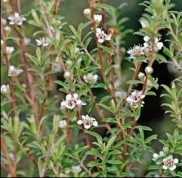