Early records show horseradish used as both a food and medicine from the 13th century in Scandinavia, due to its many stimulating and health-promoting effects. While usually taken internally, there is also a history of use as a poultice on the chest for irritated upper and lower respiratory airways and winter bugs.

New Zealand-grown Horseradish contains a small amount of strong volatile oils, which based on traditional herbal practices have the effect of relaxing the lungs, as well as being antiseptic.

Horseradish supports irritated and congested respiratory airways, encouraging the expulsion of excess mucus and promoting a more fluid mucus. It also acts to stimulate circulation and aid in warming. 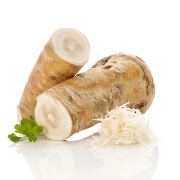