Originally from Europe, West, Central and East Asia, Burdock is naturalised in Australia & New Zealand on waste land, roadsides and on forest edges. It is classified as a noxious weed as its prickly heads are notorious for catching on clothing and ruining sheep fleeces. They are so effective in attaching themselves to whatever is passing by, these prickly burrs were allegedly the inspiration for the development of Velcro.

Burdock root has been medicinally used for centuries and features in many different medicine systems –  European, North American, Japanese and Traditional Chinese Medicine –  with the common indication as a blood purifier for skin conditions & antipruritic to reduce itching. Today it is still widely used in Asian cooking.

In 14th C Europe it was combined with wine and used to treat leprosy. Pharmacological studies have demonstrated anti-inflammatory, free radical scavenging and anti-proliferative activities for Burdock root extracts, and it has exhibited in vitro activity against a number of gram negative bacteria. 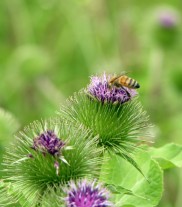