Black Cohosh is native to North America and was traditionally used by Native Americans in the treatment of women's health problems and rheumatism.

More recently, herbalists have advocated Black Cohosh as an alterative to hormone replacement therapy (HRT) in the treatment of menopausal symptoms. Several well designed clinical trials have now provided evidence of a reduction in menopausal symptoms with regular use of this herb.

The actual mechanism of action of Black Cohosh in the management of menopause has not been clearly established to date. It appears to exhibit an oestrogen-like effect which helps to alleviate menopausal symptoms, many of which are caused by the decreased levels of this hormone in menopausal women. Recent investigation has suggested that constituents in Black Cohosh work on certain parts the brain to exert this effect, rather than having a direct oestrogenic effect.

It also has a reputation for nourishing the nervous system, and may therefore help relieve symptoms associated with menopause through acting on the nervous as well as reproductive system. 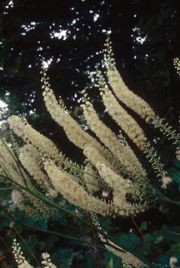